Sliabh Liag Distillers have turned the sod on the site of its new distillery in Ardara in County Donegal.

The distillery is expected to open next year, eventually employing at least 40 people.

Members of the Ardara Town Traders Association and the founders of Sliabh Liag Distillery, James and Moira Doherty, came together yesterday in The Showfield in Ardara for the sod-turning ceremony.

It followed the raising of €1.5m over the last two weeks through a crowdfunding effort, which will finance the next stage of the distillery’s expansion.

James Doherty says that following the huge response to the crowdfunding effort, plans for construction of the distillery in Ardara are now full steam ahead.

He said their funding took yet another giant leap forward this week with the announcement that three of its existing shareholders had committed an additional quarter of a million euros to the business.

Mr Doherty has been telling Ocean FM News what the latest news means for Ardara and for whiskey distilling in Donegal.

Meanwhile, over the past week, Sliabh Liag Distillers have taken new orders from existing customers for its products across its range.

Among countries from which orders came were Russia, Finland and Germany, with orders from Italy and Australia expected this week.

The distillers say Dark Silkie and An Dúlamán are proving particularly popular and make up 90% of the volumes ordered.

Production at its Carrick Distillery has stepped up another gear, with its bottling line busier than ever.

Stephen McCahill. chairperson of the Ardara Town Traders’ Association, says they look forward to supporting James and Moira Doherty as they reclaim the distilling heritage of Donegal and make the Sliabh Liag peninsula to Irish whiskey what Islay is to Scotch.

The company also bridged the Atlantic and 200 years of history with the arrival of its spirits in the United States last month. 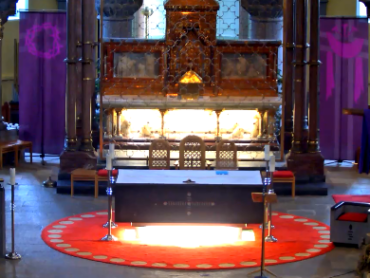 Mass from Sligo Cathedral, Sunday the 24th of January