Striker Achille Campion came off the bench to inspire Cork City to a come-from-behind victory at the Showgrounds last night.

The Frenchman claimed his first goal for Cork by tapping home from close range against his former club to cancel out Kieran Sadlier’s opener for the home side.

And Kevin O’Connor’s late corner kick flew past everyone and into the net to seal a victory that takes Cork 16 points clear at the top.

And they had to do it despite top-scorer Seanie Maguire missing from the spot in Sligo for the second year in a row as Cork struggled initially to peg Rovers back.

The league-leaders made a blistering start, and should really have been ahead inside the opening three minutes.

Former Bit O’ Red midfielder Jimmy Keohane had a great chance in the second minute when he found himself free from Maguire’s cross into the area, but he could only direct his close-range effort straight at Rovers keeper Micheál Schlingermann.

The ball rebounded out for Karl Sheppard – a late inclusion in the starting team after the withdrawal of Garry Buckley – but he too found Schlingermann in his way as he tried to pass the ball to the net.

A minute later and Sheppard was released again in the right-hand side of the box, but his low shot was expertly tipped around the post by the netminder.

But despite missing the suspended John Russell, Tobi Adebayo-Rowling and the injured Daniel Kearns, Rovers were not overawed, and they forced their way into the contest as Chris Kenny released Sadlier on the left, and Alan Bennett had to make an important block to deny the winger.

Maguire picked up an early booking as Cork’s frustration grew and the home side’s industry was rewarded midway through the half, when Bennett tried to cut out Sadlier’s ball into the box but caught Liam Martin in the midriff.

Referee Robert Hennessy pointed to the spot immediately and the in-form Sadlier stepped up to send Mark McNulty the wrong way from the spot for his eighth goal of the season.

It could have got even better for Rovers ten minutes later, as Raff Cretaro broke skilfully down the left before crossing for Jonah Ayunga, whose curling shot was tipped around the post by McNulty at full stretch.

From the resulting corner, Liam Martin saw a low shot blocked by Greg Bolger, while McNulty was then called into action again to deny Cretaro.

Cork did have the ball in the net just before the break, but Bennett was adjudged to have fouled Schlingermann as he bundled the ball in from close range.

But the visitors had a great chance to get back in the tie ten minutes into the second half when Sheppard was fouled by Kyle Callan-McFadden.

But Maguire missed from the spot for the second time in two seasons, as his effort flashed the wrong side of the post.

Cork boss John Caulfield responded by introducing Campion off the bench, and the forward had the simple job of tapping to an empty net just three minutes after his introduction as Johnny Dunleavy’s breakout effort was palmed into his path.

Youngsters Mikey Place and Martin Walsh were introduced off a Rovers bench that included five U19 players, but Cork went in front with just nine minutes remaining when O’Connor’s corner deceived everyone inside the area and crept inside the far post.

A stinging half-volley from the impressive Liam Martin threatened McNulty’s goal at the other end, but that was as close as Rovers came to salvaging a draw, as Cork claimed yet another three points and extended their unbeaten run to 15 matches. 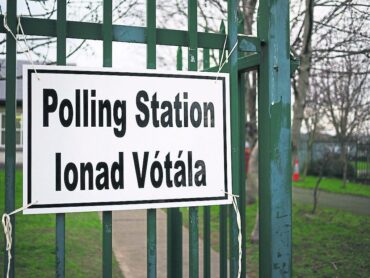 Lowering the voting age to 16 – Pringle outlines his case

I’m no bully insists Doherty in response to Varadkar comments