The major game of the weekend on the representative front was the second-round Oscar Traynor clash at Cootehill between the Monaghan / Cavan League and the Sligo Leitrim District Soccer League. This was a tough call for Manager John Loftus and assistant Lee Marshall as Cavan/Monaghan having already beaten the Donegal League by the odd goal in three knew a win here would give them certain qualification to the latter stages of the competition. Sligo Leitrim without the influential Conor Griffin because of suspension plus the unavailability of some key players due to social commitments meant the inclusion of some young guns for the big stage.

The game was played at John Sherlock Park, Astro facility at Cootehill so the tempo was going to be high from the start with the advantage to the home side having used the facility but in the end the rub of the green may well prove a factor.  Sligo Leitrim had the better exchanges for long periods in the first half and were unlucky on two occasions not to be awarded a penalty but such is the joy of away ties. Captain Ross Mc Laughlin and Ryan Mc Manus were dictating matters in midfield and on eighteen minutes Mark Mc Goldrick shot just narrowly wide. Monaghan/Cavan started to make headway and with two minutes to half time Captain Mark Thornton fired home from close range following a goal mouth scramble. However, Sligo Leitrim responded within a minute a cross from the left from Paddy Woulfe was met by the head of Aaron Calpin who scored a glorious equaliser to leave it all square at the break.

Cavan / Monaghan wasted no time in regaining the lead two minutes into the second half and Ronan Sturrat fired home and Sligo Leitrim were starting to show signs of wear. They were further exposed twelve minutes later then Mark Thornton netted his second a rather speculative shot from twenty-five yards that slid under the body of Stephen Heraughty in the Sligo Leitrim goals. Sligo Leitrim continued to battle and were rewarded six minutes from time when Mark Mc Goldrick netted. The joy was however once again short lived when three minutes later Monaghan / Cavan completed the job with two more scores the fourth goal from Stephen Smith and the fifth from Ronan Sturrat. This was a fine result for Monaghan / Cavan that will now see them progress to the final rounds of the competition and on this display, they will be a handful for most sides particularly at home.

There were two games down for decision in The Great Southern Hotel Sligo Super last week’s major winners Calry Bohs were away to Yeats United a win or draw for Calry would move them into fourth place on the leader board while a win for Yeats would also move them into fourth position so it was all to play for.

The home side started quickly and Calry were under pressure but in the end the only goal of the game was cracked home by Alan O Dowd that captured all three points for the Yeats men as well as catapulting them up the league tables.

The second game had Aughanagh Celtic at home to Glenview Stars still without a win after eight games and having conceded the most goals so far this looked a banker for Aughanagh and so it proved to be hitting six goals past the Stars. Stephen Craig and Conor Mc Padden with two goals each plus a goal apiece for Paul Mc Tiernan and Thomas Cryan sealed the points for a rampant Aughanagh who now move away from the relegation zone. Stars struck twice with a goal each from Wayne Wallace and Ryan Gethins and despite losing Stars battled all the way.

In the Andrew Mullen Sligo Pallets, Premier League Chaffpool United were at home to bottom of the table Gurteen Celtic a win here for Chaffpool would put them fifth on the leader board and into the top half of the Premier while Gurteen Celtic despite the result will be competing for honours in Division One. Chaffpool made no mistake with a goal from Damien Watters and Mark Coen banking all three points for a jubilant Pool.

Dromore Villa at home to Arrow Harps new a win could see them in the mix for Premier League status but Arrow Harps also new a win here would give them a massive boost for Premiership survival with their last game against Real Tubber perhaps sealing the issue. But first off was the challenge of the Villa.  This proved a tight contest with neither side giving way but eventually the Riverstown Boys emerged winners by the odd goal in three. Stephen Feeney was on the mark for the Villa but goals from Andy Flynn and Liam Touhy won the day for Arrow Harps.

All results by 1.30pm after game to 087 1417566 Where a ground is deemed unplayable the home team can if possible provide another approved venue otherwise the game must revert to the opponent’s ground. Where both grounds are unplayable the two teams concerned can agree fixture for approved Astro if available, and split the costs 50/50. Home Team responsible to provide at least Four (4) Match Balls for all Home fixtures.

Training will continue on Friday the 16th of Sept at IT Sligo commencing at 8.00pm Team Manager John Loftus will be in contact with clubs and players in the next week. 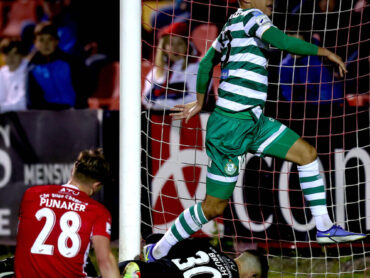